Remake it Meaningful was part of the four-month Design.Samsung Idea Festival, created to share the philosophy behind Samsung Electronics and bring awareness to the Design.Samsung website.

A viral video was created in collaboration with artist duo Fabrikr upcycling, demonstrating the concept of the competition as they repurposed discarded cardboard boxes to create new and valuable designs. The video captured the public’s interest, introducing the competition as well as on / offline exhibition. designfever was responsible for the overall planning and execution of the Design.Samsung Idea Festival, including its on / offline exhibition. More than 100 students Submitted their designs from October 20th – November 7th, 2014. Over 1,000 Internet votes chose their favorite votes, voting over 3,000 times and sharing the results via SNS. The winning designs were displayed on the Design.Samsung website, as well as an exhibition at Samsung’s D’light exhibition space.

‘Make it Meaningful’ serves as the motto for Samsung Electronics’, encouraging the creation of sustainable designs that bring meaning and value to our lives. Along the same idea, the Design.Samsung’s Ideas Festival encouraged the creation of new designs from discarded cardboard boxes that would bring meaningful value to our lives. In order for users to understand and want to participate on in the contest, Design.Smausng collaborated with artist duo Fabrikr to create a viral video showing the transformation of discarded cardboard into new and valuable designs. The video not only introduced the competition, but also the on / offline exhibition. We designed a user experience that included visuals of discarded cardboard materials, containing the theme for on / offline promotions in order to create a consistent brand identity.

The competition targeted both Korean and international students, requiring an additional layer content to provide everyone with an overview and information about the competition. To visually express the competition, a viral video was produced with renowned artist duo upcycling Fabrikr as they created a meaningful design discarded packages from Samsung products. Short cuts were used to show the overall process of gathering cardboard boxes, cutting them down into pieces, and reconstructing them to create a new design. The final scene of the film shows the completed design, showing the competition’s motto and overview before displaying the site’s URL. 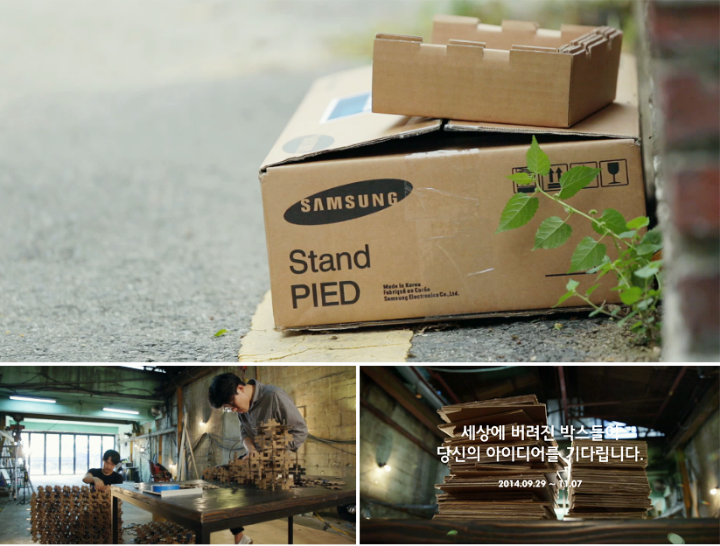 A separate page was created on the website Design.Samsung that let students to easily submit their designs, receiving over 100 submissions from foreign and domestic students. Their work was judged based on aesthetics, creativity, and practicality, with 10 designs being selected as final winners. The 10 final designs were then voted on by internet users, who shared the designs via SNS for a chance to win the ‘Internet Voting Award’. Over 1,000 people participated in internet voting, casting over 3,000 votes to select their favorite design. 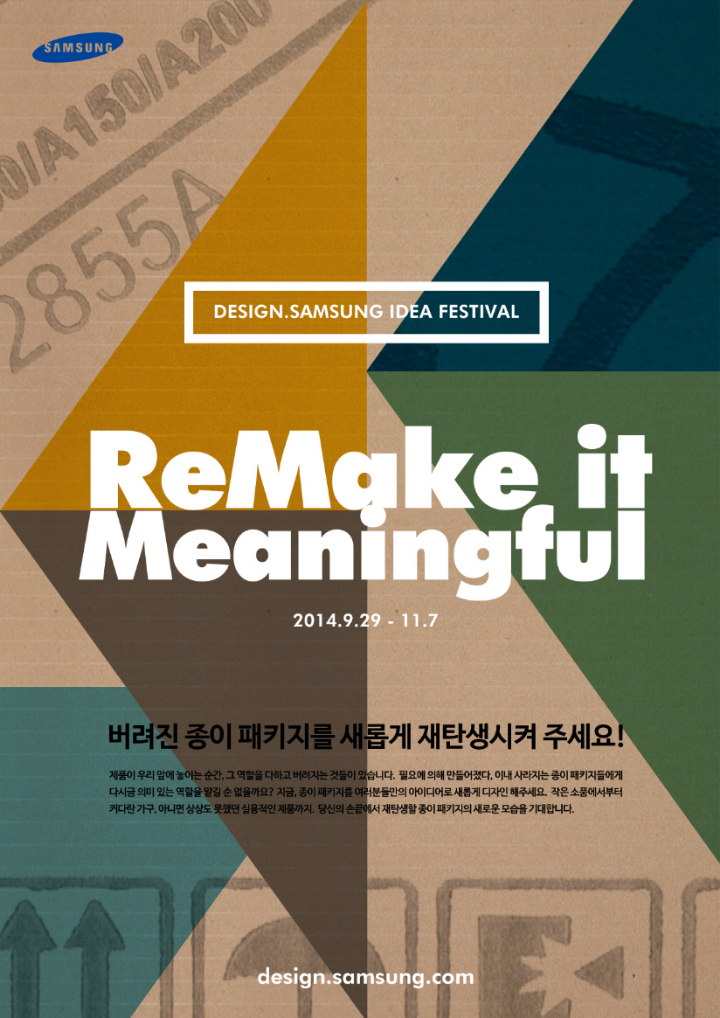 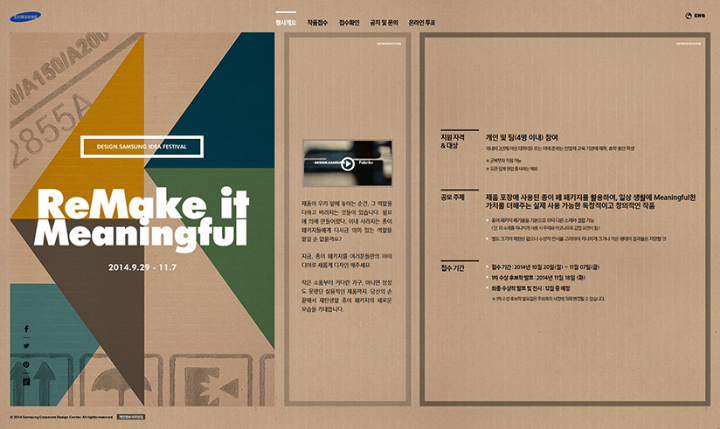 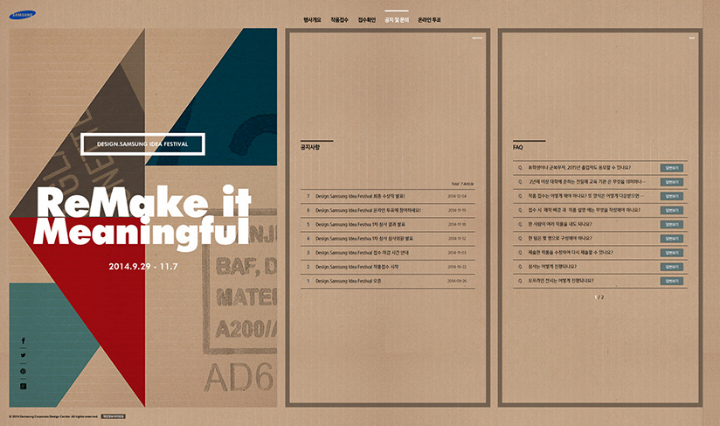 To share the excitement of the online exhibition, an online exhibition took place on the Design.Samsung website to showcase the award-winning designs. Using a traditional gallery format, images of the 10 winning designs were naturally displayed as well as their descriptions, features, and additional commentary from judges. 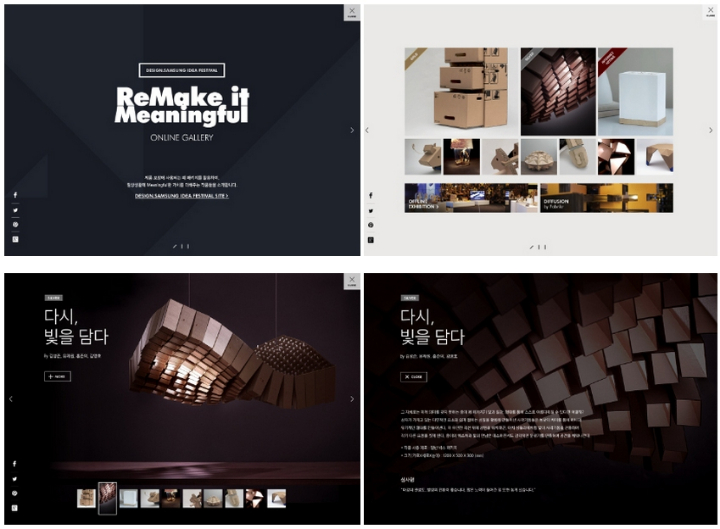 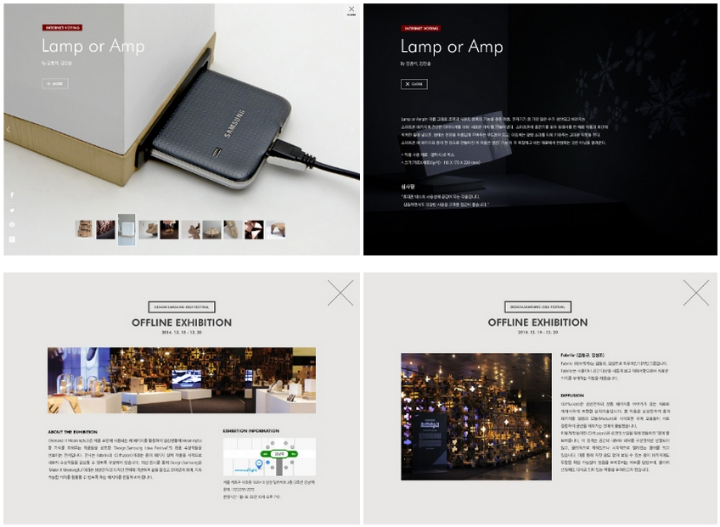